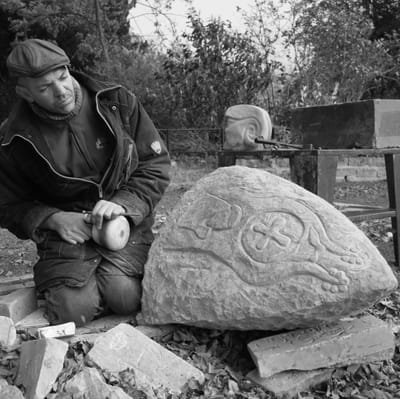 From sculpture to cultural projects, from drystone walling to landscape partnerships, from Hip-Hop to philosophy, I join dots that many might fail to see, and in doing so, open up new ground for thinking about and acting upon change in uncertain times.

Drystone walling being my bread and butter, there is an emphasis on that here by way of attracting work, though I'm keen that the site should cover the other areas of my work and practice.

Growing up in a remote corner of the Lake District, drystone walls were the cradle of my consciousness. Turning my back on academia in my twenties, I chose instead the vagaries of life as a freelance artist. Drystone walling became my "trade to fall back on". I have, to this day, fallen back upon it with great regularity.

I became a Master Craftsman in 1997 under the professional guidance of Neil Rippingale and was lead waller on a sculpture project designed by David Wilson that was awarded the Pinnacle Prize in 1998.  As well as producing both simple and elaborate garden features, I also remain committed to providing farmers with the walling services they value.